I've been playing more video games since moving in with the Fella, and especially since he got an Xbox 360 for Christmas. And it turns out that I suck. Hardcore.

Specifically, I'm terrible at First Person Shooter games like Halo 3 and Call of Duty. I've pretty much figured out why I'm so bad, but I'm not sure what to do about it.... My biggest problem is that I have no concept of how various parts of the map relate to each other. When I'm playing, I'm pretty much wandering around the map with no concept of where I'm going or how I got there.

Aaron and I were playing Halo 3 on a newly downloaded map last night, neither of us had played it before. It wasn't long before he had the layout pretty well figured out, and was trying to describe it for me.

Me: Hey! Where did you find that Gravity Hammer??
Aaron: It's in the central tower.
Me: Central tower? Where the hell is the center?
Aaron: Ok it's like this: there are the two smaller towers along the edge of the map, and each one has a couple of catwalks leading from there to the big central tower in the middle.
Me: (non-distinct gurgling sounds, brains start dribbling out of my ear)

The thing is, I could totally take what he was saying and turn it into a top-down view of the map in my head. But for some reason, I just cannot seem to relate my imagined top-down view to what I'm actually seeing on the screen in 3D. I try really hard to pay attention to what I'm seeing and build that map in my head but my brain just doesn't seem to be wired that way.

I am slowly (veeeeery slowly) getting better at it, but not quickly enough to prevent myself from getting the shit kicked out of me 9 times out of 10.
Posted by Greg at 9:11 PM No comments:

I Am My Own Wardrobe Malfunction, ctd

Conversation in our place tonight:

Me - Hey Aaron, do you know where the ironing board is?
The Fella - I don't think we have one.
Me - Really? I thought we did... I gave mine away when I moved in.
TF - Nope, I think we were going to go get one of those little ones at IKEA but never got around to it.
Me - Huh.

The thing is, I generally don't like ironing at the best of times. I purposely buy clothes that don't need ironing... I am the king of the Mark's Work Warehouse outfit. Consequently, I've probably ironed maybe 10 times in my entire life. I'm not very good at it, and it turns out I'm even less good at it when it has to be done on the kitchen table. It's going to be a crinkly week.
Posted by Greg at 10:11 PM No comments:

This jar of peaches showed up at the back door of our apartment building yesterday, sometime in the twenty minutes between the time I went to Safeway and the time I got back. They were still there today.

Who just forgets that they left a jar of peaches on the stairs?? 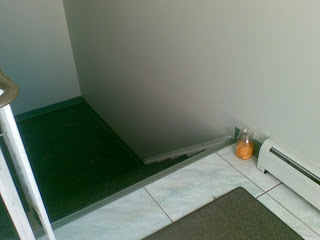 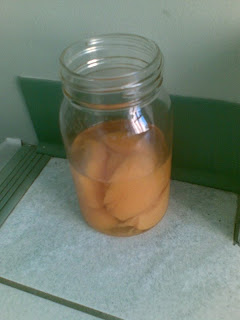 How Dumb Are People?

I've gotten IMs from at least five of my MSN chat buddies today, with a link to http://img6244.meetyourims.com/. If you're dumb enough give your username and password to any random site on teh intertubes, they you deserve to have your account hijacked.

Tell ya what, anyone who replies to this post with their credit card information will be signed up for a fantastic club! It'll be so much fun, you better join!!
Posted by Greg at 6:52 PM 3 comments:

We Are All Fucked

How long before they develop Skynet now? Between this and the dolphins, we are sooo fucked.
Posted by Greg at 12:17 AM No comments:

So Much To Blog About, So Little Time

Well actually, it's more like I've been too lazy/unmotivated to actually sit down for a few minutes and hammer out a post. The fella and I have been super busy for the last couple of weeks though, so that's my story and I'm sticking to it.

That's it for now. I'll be making a point of blogging waaaay more frequently so I don't have to do these massive posts!
Posted by Greg at 11:01 PM 1 comment: