This past Saturday was ridiculous. It was our friend Jorge's bachelor party, since he's getting married to Erin this weekend. The wedding is on the same day as the Pride parade, so the Fella and I will be dressed in our finery. The plan is to attend the wedding, then go down to the beer gardens and let everyone think that we just got married. Let the free drinks flow!

We spent the afternoon at a BBQ at Erin's parents' place in Sherwood Park, and it was waaay fun! There was a ton of food, beer and shots aplenty, and lots of cool people to hang out with. The BBQ ended with Jorge getting concussed during a shirtless wrestling match... by which I mean all the guys rolling around on the ground with each other. Straight boys are all such 'mos. Jorge went from pretty much OK to "I need a nap, right now." So despite it being his party, he missed out on the rest of the night's festivities.

After the BBQ, we went down to the sketchy part of sketchville, the community hall on 118 Ave and 92 St, for some PRO WRESTLING ACTION!! It was as cheesy as you'd expect for the Pro Wrestling scene in Edmonton, and the crowd was weirdly diverse: everything from a little old with her knitting needles to youth rugby teams to 35 year old virgins (lots of them) to a group of rowdy drunks that took up a whole section. That last group was us, in case there was any doubt.

The wrestling was great, it was a lot of fun cheering for the good guys and booing the bad guys. The best part of the night was the Championship Match between hometown boys The Vigilantes and the light-in-the-loafers villians Domestic Partnership. Of course everyone was supposed to be cheering for the Vigilantes but our section threw a wrench into the match by going nuts for DP. They turned around to boo us at one point, until the realized that we were actually cheering for them.... I don't think they get that too often!

Pictures to follow if I can track them down!
Posted by Greg at 7:07 PM 2 comments:

Robots may be R Friends, but apparently TV is not.

What if the robot has a TV built in?? 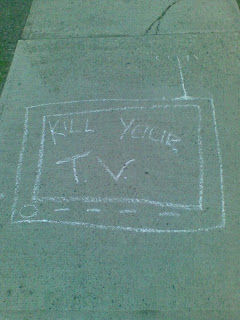