Who is reading this??

I'm delighted that someone is getting some use out of my blog despite the fact that I haven't posted anything new in forever!

Installing Windows 7 x64 on my MacBook

I'm sure many of you will think this is blasphemy, but I like Windows 7 better than OS X.  I've been running Win7 x86 on the fella's old 13 inch Blackbook for about half a year now, and it works relatively well.  I just got upgraded the RAM, though, and since 32 bit versions of Windows can't access all 4 GB I figured it was time to upgrade the OS.

The Windows installation was smooth, no problems at all.  When it came time to install Boot Camp drivers though, I ran into some trouble.

I started off trying to install the Boot Camp drivers that came with the Blackbook, but running Setup.exe just came up with an error:  "Bootcamp x64 is unsupported on this model".  After some Googling, I found a workaround that allowed me to install the drivers.

The driver installation went... OK.  It got most of the way through, until it got to the 'Intel chipset' portion, and then it seemed to freeze up.  I waited a good 15 minutes, but it just sat there doing apparently nothing.  Checking the processes actually showed three instances of the installer running, taking up 100% of the CPU, but it wasn't going anywhere.  I ended two of the three processes, and the last process finished up 'successfully'.

I then tried to install the Boot Camp 3.2 upgrade, but it required 3.0 at a minimum and I had only installed 2.0.

Sooooo, I tried running the Boot Camp installer from the Fella's Snow Leopard CD, using the same workaround above... and it worked like a charm.  I then had to install the 3.1 upgrade, and finally 3.2.

Boot Camp is right up to date now and working great!
Posted by Greg at 10:15 PM 2 comments:

...and there's Rosie, the robot maid!

Actually, her name is Rosalita after the maid from Goonies.  Santa brought us a Roomba for Christmas, and she's keeping our condo spic and span!

My cat Oscar isn't such a big fan, but I told him we can get rid of Rosalita when he starts vacuuming. 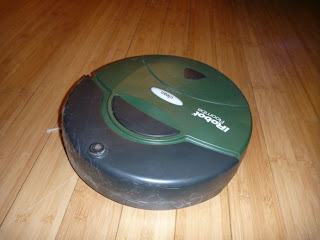